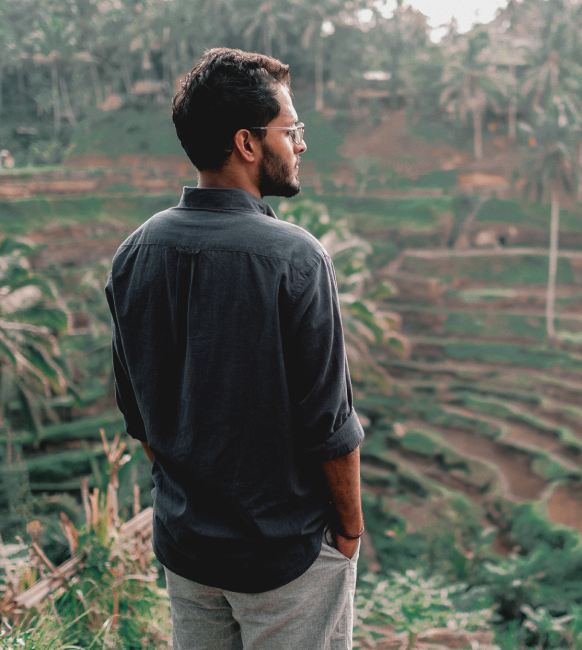 Benjamin George is a curious, multi-disciplinary designer of many useful and beautiful things (he likes referring to himself in third person). Born in Bangalore, he now happily lives and works in Singapore as the head of design at ReferralCandy.

Ben is a creative leader who values authenticity, collaboration, and balancing unique ideas with measurable outcomes. His strengths are primarily in having and encouraging a growth mindset, in creating a work-life balance where ideas can thrive, and encouraging creative thinking.

He thrives in fast-paced and experimentally-driven environments. You'll see this when he asks a lot of questions about how something fits into the larger work, pushes for minimum-viable solutions to see ideas come to fruition, or figuring out how he can help his colleagues do their best work. Since he was a self-taught designer, he enjoys mentoring designers and driving positive change.

“I had the pleasure of working with Ben for several years. Ben was able to design a clean, elegant, completely outside-the-box interactive and visual experience that delivered on all the product needs.”
— Cary Feuer, Director, Product Management, ADP

Ben’s journey is a little different than most. He started his career by dropping out of school at 16 with grand plans of becoming a 3D artist and making animated movies for Pixar. After realising he, quite frankly, sucked at it, Ben began teaching himself graphic and web design at the age of 16.

In a leap of faith, Ben joined a design studio for his first job, where he grew from a web designer to a creative director. He led a team of 12 designers from around the world. He’s had the honour of developing products and services for companies such as  Intel, General Electric, SAP, Coca Cola, P&G, MIT Sloan, IBM and US Army to name a few.

After that, Ben served as the head of product design at FreshMenu, where he led a small design team to improve the way people order food online. Fast forward a few years; Ben now finds himself in Singapore heading the design team and shaping the future of customer retention at ReferralCandy and CandyBar.

“Ben’s creative skills are top notch, and he always tries to keep things simple. He tries to get an understanding from a developer’ perspective without compromising on the usability of the end product.”
— Bharath Booshan, Senior Mobile Engineer, Atlassian